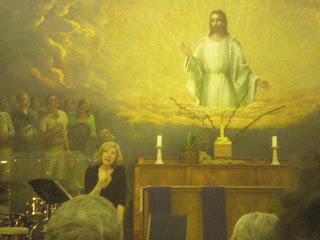 See this photo of me (kind of blurry in a black sweater) speaking in front of an enormous mural of Jesus and His modern-day apostles? That was at Church of the Redeemer in Houston where I spoke a year ago about my "Days of Fire and Glory" book. Well...this Sunday the 27th, hundreds of people will pour into Redeemer for what will be the last service in that 90-something-year-old church.
Funds have been sparse at Redeemer for a long time and when their rector left last fall, there was not the funds to replace her. The church was costing tons in utility bills. The congregation when I visited was about 60 people. Then the diocese did some sort of study of the physical plant and concluded that it was no longer safe to occupy. Below is an explanation I am cutting and pasting from a letter from the senior warden:

The need to vacate the building comes from the fact that the building is no longer safe to occupy. According to Tellepsen Construction and Studio Red Architects, the existing condition of the electrical, mechanical, and plumbing systems, the chunks of concrete separating and falling from our buildings (“spalling”), the lack of a fire alarm system, and the inadequacy of emergency exit signs and lights is more than enough to revoke our Certificate of Occupancy, if the Fire Marshall inspected the buildings. The cost of addressing just these issues would be $5 – 7 million. Neither our congregation nor our Diocese can afford that; and even if all those things were repaired, our congregation can no longer afford to maintain the building. Nevertheless, the Bishop told us that “the temptation you must resist is to say that it’s all over now.” It’s not all over now, unless we choose that, and we have the freedom to choose otherwise.

I've heard of churches being closed but....being demolished?? This is enormous news for a church that was considered architecturally quite radical when it was built. Why? Because it had no windows when it was built around the time of the Depression (I believe there was an earlier church in that spot before the present one was built but I gave away all my newspaper clips about this back to the folks at Redeemer so can't check the exact facts). The windowless part was to conserve on air-conditioning (which was a much newer invention back then) and to draw attention to the stunning mural of the Ascension painted by John Orth. That's the mural that everyone hopes to save when the demo crews arrive.

And so the congregation (and it's not a large one) is having this huge good-bye party this weekend for the diaspora (all the folks who passed through Redeemer in the past 50-some years) to visit and say good-bye. I got a call this afternoon from a Houston Chronicle reporter who wanted to interview me and she told me 400 guests were expected. That's just the ones who've RSVP'ed, I assume, so who knows how many will really show. There are events Friday, Saturday and Sunday.

I have been wondering for 2 weeks whether to fly down or not. Being unemployed for nearly 9 months kind of puts a crimp in one's ability to travel about. Fortunately I had enough frequent flier miles for a direct flight on United; sitters for the kitties and for Veeka were free this weekend so I figured the doors were open. And it appears I made the right choice. An added bonus: while there's snow on the ground here, it is in the mid-70s down there.

The photo, by the way, was taken by Eric Sawyer.

Julia,
I found your blog today after reading the sad news in today's Houston Chronicle regarding the issues at Church of the Redeemer. Hope all is well.
Jim & Vicky Keys

I am writing in regard to your article foir the Washiungton Post on January 25th. I am trying to located the photo for that article. The young man in the photo is my son and I would like to get a copy of the photo.
Thanks, Shirlee Baldwin secoflaw@aol.com

Hello all, my blog has a new home at:

Please join me there!