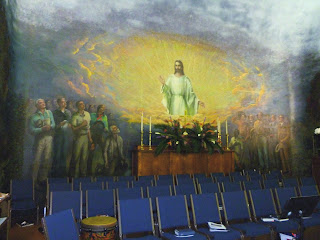 Was up at 2:45 a.m. to catch a flight to Houston - no problem getting there but then a late breakfast with Stevie Sawyer was a comedy of errors as we kept on missing each other at whatever Denny's we were supposed to meet at on I-45. Then my cell phone was buzzing with emails about the possible resignation (which turned out not to be true) of Metropolitan Jonah, someone I had JUST finished doing a huge profile on for the Washington Post Sunday magazine. So here I was having deep conversations with Stevie while trying to follow breaking news.
After that ran by one of the only classical Catholic schools in the country - cool place in Sugarland just SW of Houston - was gathering info for yet another WaPo Sunday mag piece. Then found out that I was quoted in a Houston Chronicle article that came out Friday about Redeemer's closing. Dropped off my things at the Hornbostels and caught up with Margaret - old friend and former community buddy - then off to potluck at the church where I met lots of old legends wandering the hallways such as Bob Eckert and of course Jerry and Alison Barker - those 2 men being 2 of the original 5 elders.
A cool worship service followed - the highlight being Wiley Beveridge (that wonderful voice is as golden as ever) playing "A Larger Place" on the piano while Max Dyer did cello. You could just see the faces of all the people going back 40 years to another era when all was young and fresh and hopeful. People slowly stood and lifted their hands and worshipped as we melted into one chorus after another. Max called the crowd "a river of people who've come through this place" and then Wiley did "Great and Wonderful" as an encore. Then the 8-fold Alleluia as many of wondered HOW could the diocese be tearing this building down? Sure the congregation can meet elsewhere but buildings have meaning. Worship is different in a cathedral than in a box. The new place they are going to won't have the expansive aisles, soaring mural of Jesus - the majestic interior that can't be copied. It feels like a bitter slap from the diocese which has slated - believe it or not - a deconsecration service Sunday right after the closing words of the main service. Great timing.
Near the end, we all sang "Jesus, How Lovely You Are," that old 70s chestnut, in parts. We had such better music back then. All is bitter-sweet; Jerry Barker is 86 now and he has decided not to do kidney dialysis which, barring a miracle, means his days are quite numbered. "I've had a good run," he told me. "I have no regrets." Would that we could all end like that.
Posted by Julia Duin at 8:32 AM

Julia: I have been trying to locate the original articles you wrote about Redeemer. I was 5 when my family joined, and i remember much, but not all.

Hello all, my blog has a new home at:

Please join me there!